As the night wore on at Bakersfield Speedway on Saturday, one thing became painfully apparent: nothing was going smoothly. Caution flags and race-halting red flags ate up time and by the time the featured event — a 25-lap IMCA Modified race — took the to the track the 11-o’clock curfew was looming. When that race got off to the same sort of “start” as the earlier American Stock, Sports Mod and Hobby Stock races — a red flag before a lap was completed– everyone knew it was going to be a short race. That worked out just fine for Scott Pounds, who started on the outside of the front row and led all 10 laps to become the fifth different winner in five races. “To be honest, I didn’t know I’d ever make it back here,” Pounds said from Victory Lane. “I spent the past few years dedicated to my boy (Brad) and figured I’d get back in and play. “I’m getting up there in age, I’m 52, but figure I’ve got a couple of good years left.” As for the race being shortened, Pounds said: “A win is a win and I’m tickled to death.” Josh Vogt finished third with hard charging Brad Pounds, who started 10th, third, Gary Dutton fourth and Bryan Clark fifth. While the IMCA Modified feature was short, the Hobby Stock feature was even shorter — a mere five laps — to allow time for the Modified race. Four yellows and two red flags in the first four laps had officials setting up a one-lap dash on the final restart. Points leader Jimmy Irwin easily won the one-lap sprint for his third win. Chad Johnson was second, Tyler Johnson third, Perrin Koostra fourth and Steven Johnson fifth. 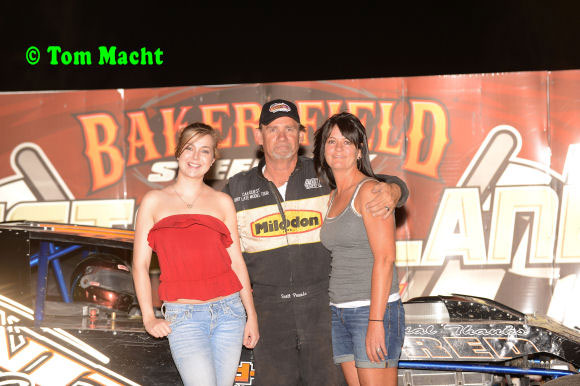