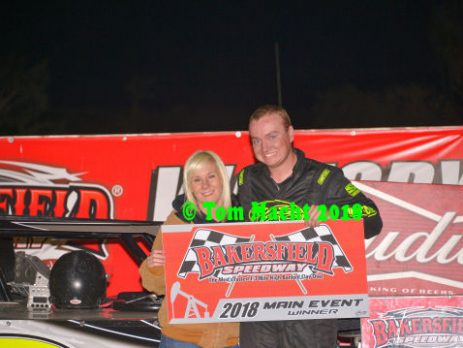 Nicholas Johnson climbed from his race car and pounded his fists against the roof as if he were beating a drum.

That was the winning feeling on Saturday night at Bakersfield Speedway as he raced to his first victory in a Hobby Stock.

“I came out here last race (in his first ever Hobby Stock race) and had a little mess up in turn four and spun so I wanted to redeem myself,” the former American Stock track champion said. “I’m kind of the underdog out here because everyone out here is so good and have been doing this so long.”

Johnson went low in turns three and four on lap 16 to take the lead from Michael Scruggs, who led the first 15 laps.

The there were two restarts over the final nine laps of the 25-lap feature on the third-mile clay oval but Johnson pulled a couple of car lengths ahead on each one.

“We had a really good race car all night,” Laney said. “I can’t thank Terry Henry enough for letting e drive his car.”

Robby Sawyer made a late charge to finish second, followed by Logan Drake and Alex Sanford.

In Sports Mod action, Gary Dutton led from start to finish to win the 25-lap feature.

It was hardly easy, however, as Dutton had to fend off challenges on several restarts.

“I tell you what, it’s hard to start on the front row and lead every lap because you don’t know where the fast guys are,” Dutton said. “You just have to run your line and hope they don’t beat you. There were a lot of fast guys out here. My car worked really good.”

Cautions were the name in the American Stock feature as there were seven in the first 11 laps and a crash after the checkered flag flew in the 20-lapper.

Maynard started on the pole and led all 20 laps. Maynard opened up a nearly half-track lead before the first of two caution flags bought hi back to the pack. Maynard easily pulled way on each restart in the first Mini Stock feature of the season.

“I’ve got to thank Skip Spiller,” said Maynard, who was in a new car. “I’ve always run at the back of the pack.”

Trevor Miller came on strong in the waning laps to finish second with David Wolford third.