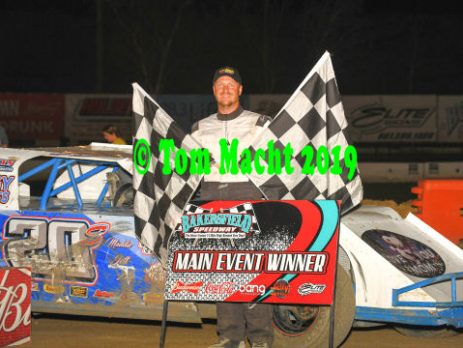 BY MIKE GRIFFITH mgriffith@bakersfield.com    There was one fast way around Bakersfield Speedway in the Sports Mod feature on Saturday night: up high on the third-mile clay oval.

Kevin Johnson got there first from his outside front row starting position and led all 25 laps for his first win of the year.

Johnson’s biggest challenge came a few laps after a restart. Gary Dutton went low in turns one and two to draw even on the 13th lap, The two were side-by-side coming out of turn four but Sutton could not keep the power down and Johnson edged ahead.

Dutton faded after a restart on lap 17 and Jason Nation came on to finish second with Bryan Clark third Dutton, who won on Friday night at The Dirt Track at Kern County Raceway, wound up fourth with Guy Ahlwardt fifth.

The race was halted by a red flag 10 laps in when a five-car collision in turn three left Brylon Holder’s car upside down at the entrance to the turn. Holder, and the other drivers involved, were OK.

Kevin Irwin took the lead early in the 25-lap Hobby Stock feature en route to his second win of the season.

Aaron Stewart led the first three laps before giving way to Irwin after contact from Irwin. Stewart then maintained his second-place standing the rest of the way. Trevor Baker nipped Jerry Flippo for third at the finish line.

“I got a little impatient there with the 37 car (Stewart) but I had to go with all the fast guys behind me,” Irwin said.

Other than the contact with Stewart, the only other miscue for Irwin came after the race when he over rotated on a back flip from the roof of his car and fell backwards on the landing. But he bounced right up for his post-race interview.

Cochrun, who started near the rear of the field, was running a distant fourth when a caution fell after 14 of 20 laps. He took the lead three laps after the restart.

“I knew it was going to be tough,” Cochrun said of getting to the front. “The track was fast and had a couple of grooves. The yellow saved me.”

Heron took the lead early in the race and was no challenged en route to his second win.