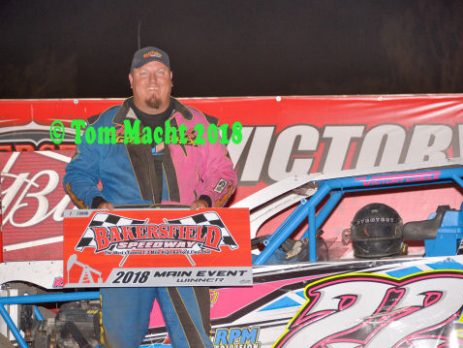 Michael Johnson was a man on a mission late Saturday night at Bakersfield Speedway and he used most of the third-mile clay oval to complete it.

As the laps wound down in the split 50-lap Sports Mod feature Johnson drove harder and harder, putting on quite the show as he would dive low into turn three with a lot of speed and let the momentum carry him high up into turn four, just inches from the wall. Sometimes his car actually was against the wall.

With five laps to go, that move paid off for Johnson as he edged ahead of Gary Dutton. A couple of laps later, Johnson was pulling away en route to his first win of the season at the track.

“I felt (the wall) a few times, you gotta be easy and not slam it too hard,” Johnson said. “I don’t mind rubbing it a little bit. It was good.

Dutton took the lead from Austin Manzella on a restart following a 10-minute break after the first 25 laps where teams were allowed to change tires and make minor adjustments.

Johnson moved past Manzella into second on lap 32. Cautions bunched the filed on lap 37 and 343, the last setting up a good-multi-lap battle between Dutton and Johnson before Johnson finally edged ahead for good.

“You leave the whole bottom open.” said Dutton, who was strong in the high groove. “We raced side by side. The best man won.”