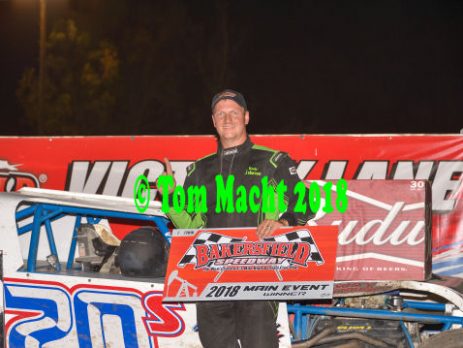 There were some hard feelings following the Sports Mod feature on Saturday night at Bakersfield Speedway.

Kevin Johnson passed James Cecil on a restart seven laps into the race and went on to his first victory of the season, despite Cecil trying to ruin his night.

Cecil drove hard into turn three to try to get under and slide back in front of Johnson but could not do so. A lap later, Cecil stopped his car in turn three, drawing a caution. When the field slowed and passed by Cecil revved his engine, roared out of the turn and down the straight where he rammed in into rear of Johnson’s car, bending some bars and sheetmetal.

The impact did not affect Johnson’s car as he led the rest of the 25-lapper after Cecil left the track and the race restarted.

Gary Dutton was right on Johnson’s tail as the laps wound down but had to settle for a close second.

“It was a good race and Gary raced me clean at the end,” Johnson said. “There’s a reason “Dump” is (Cecil’s) nickname. I stayed on the bottom. I guess he didn’t like being passed on the bottom.”

In Hobby Stock action, Nicholas Johnson took the lead midway through the 25-lap feature and went on to his second win of the season.

Johnson was battling Raymond Noland Jr. for the lead when a caution fell on the 13th lap.

Noland, who had mechanical issues in his heat race, looked to be having trouble just before the caution and that proved to be true as he could not get back up to speed on the restart and Johnson powered into the lead.

“It’s been a while since I’ve been able to beat my brother (the second race of the season),” said Nicholas Johnson, who got a big hug from brother Cody in victory lane. “I wouldn’t be here if it wasn’t for all the help from Cody.”

Zack Forster passed Anthony Balcazar with two laps to go to remain perfect in Mod Lites action. Forster has won all five races he has competed in.

A caution flew on the final lap and Forster was able to keep Balcazar at bay for the one-lap shootout.

“I’ve gotta give it up for Anthony Balcazar, I’ve been involved with him in racing since he was 8 and he probably deserved to win that race,” Forster said.

Balcazar took the lead from Roy Maynard on the 10th lap and Forster moved into second a few laps later. Balcazar ran high while Forster stuck low and the two ran side-by-side for a couple of laps before Forster edged ahead as the white flag flew.

Clinton Massey edged ahead of David Wolford on the final lap to win the 20-lap Mini Stock feature by about a foot.

Massey had passed Wolford on the 15th lap, but got caught behind a slower car as Wolford went back onto the lead and opened up a several car-length lead. Massey then gave chase and caught back up just in time.

“Tonight it was a battle,” he said. “It was a rough track but it was a tight, clean race.”

The feature was brought to a halt after just one lap when Jason Hannegan rolled a couple of times near the end of the front straight with the car coming to rest roof down. Hannegan was not injured.