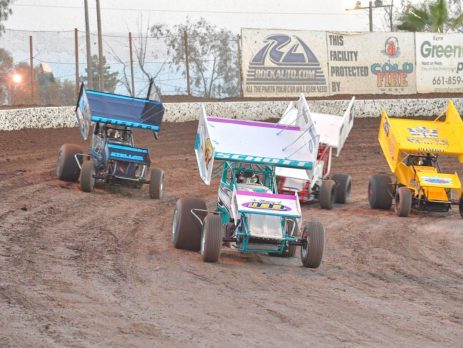 Cody Laney took advantage of slower traffic to take the lead, then pulled away to win the 30-lap IMCA Modified feature on Saturday night at Bakersfield Speedway.

Bret Bennett led the first 20 laps but got caught behind a slower car and that’s when Laney pounced, taking lead on the 21st lap and pulled away for his second win of the year on the third-mile clay oval.

“What a race car Terry Henry gave me,” Laney said. “I caught a break when Bret caught a lapped car and I was able to get by.”

Brad Pounds, who started 10th, came on strong as the laps wound down and finished second as he got by Bennett with two laps to go.

“I had a good car, especially early, but lapped traffic played a role tonight,” he said. “We’ll get them next time.”

Marcus Thomas made the long haul from Fort Worth, Texas pay off with a victory in the 25-lap Western Racesaver Sprint Car Series feature.

Thomas started on the pole and led every lap, expertly weaving his way past slower competitors from the 12th lap on.

“Coming all the way out here from Texas and just beg able to race here is overwhelming,” he said.

Thomas had a big lead when he came on traffic and Brent Duinkerken, who moved into second with seven laps to go, cut in to it a bit but had to settle for second as Thomas ran a flawless race.

Ratcliff took the lead on the sixth lap after a couple laps of three-wide racing only to see JD Mealer go to the front right before a caution on lap 15. Ratcliff got the lead back after the caution then held off Mealer and JD Coots, who got sideways in turn four on the final lap, for the win.

“I’ve been through a lot of ups and downs, it feels good to be here,” Ratcliff said.

David Woolford had the hot car in Mini Stock action and he was on fire at the finish.

Woolford took the lead on the fifth lap then pulled away from the competition in the 20-lap Mini Stock race.

But the car slowed as he came out of turn four as the engine expired. He coasted to the finish line with a few flames flickering beneath the car, just ahead of Liam Meyers.

“About 12 laps in, (the water temperature) went to 230 (degrees) and I thought I could slow down and make it to the end. It went with about a half lap left.”