McKellar, Spainhoward both end up winners at Speedway 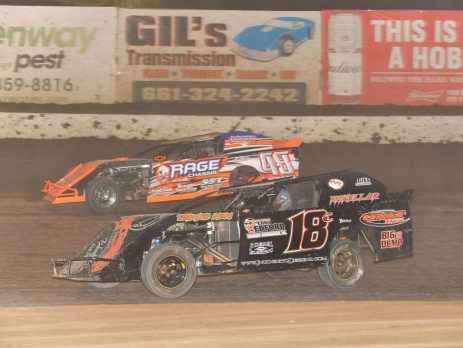 McKellar, Spainhoward both end up winners at Speedway

By Mike Griffith BAKERSFIELD CALIFORNIAN, One driver stated on the front row, the other dead last and they both came away winners on Saturday night at Bakersfield Speedway.

Chris McKellar started up front and led all 25 laps to win the Sports Mod feature. Meanwhile, Nick Spainhoward worked his way from last to a fourth-place finish which gave him more than enough points to win the two-race Motor City Throwdown United Series and a $600 bonus.

There was one fast way around the third-mile clay oval and that was in the high groove, not far from the wall on a rough racing surface.

“I tell you want, that was a rough ride,” McKellar said. “It was hard to hit my marks every time. I was scared to death I was going to jump (the cushion) and they were going to get underneath me.”

But Johnson’s momentum was in the form of sliding up the race track and McKellar powered back ahead out of the turn to win by a couple of car lengths. Gary Dutton, who ran second much of the race, finished third with Austin Manzella fifth.

“He was fast tonight, I couldn’t touch him,” said Johnson, who started 15th.

“The guys were all giving me a hard time about this Motor City points deal and calling me “sandbagger” in the pits,” said Spainhoward, who finished last in his heat race, which put him at the rear of the field for the feature. “Obviously, that’s not what I wanted. I’m racing for points here at Bakersfield Speedway and need every advantage I can get.”