Outlaws, Midgets were bookends to a solid Bakersfield Speedway season 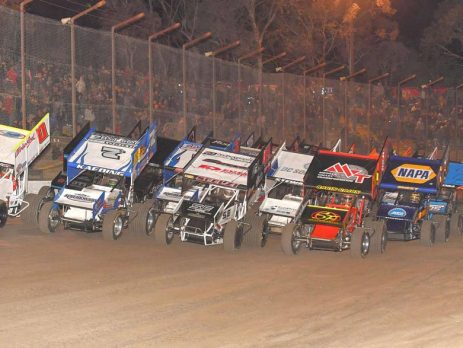 Outlaws, Midgets were bookends to a solid Bakersfield Speedway season

It’s a track where stock car racing is king, but a pair of open wheel events provided a bit of thunder in 2018 at Bakersfield Speedway.

The World of Outlaws Series, which opened the season after the first three weekends were rained out, and the season-ending USAC National Midget race both had stellar fields and superb racing on the third-mile clay oval.

In between it was a banner year for a number of local racers who came away with season championships.

“We had some good racing, some good points battles,” said Speedway owner Scott Schweitzer, who admitted he was unable to give the track his full attention this year.

Schweitzer’s daughter, Bailey, was killed in the Route 91 Harvest Festival mass shooting in October 2017 and this year was a struggle for him.

“This year, with my family situation and personal life, I’m just glad to get the year under my belt,” he said. “I probably didn’t do as much as I needed to do, there was a lot of healing to do with my family. I concentrated more on that than the track.”

The Outlaws race was the first in two years at the track and lured 35 drivers, up significantly from the previous event.

That was the same case in the season-ender on Nov. 17 when the track hosted a USAC National race for the second straight year, which lured 35 drivers to the track.

“It was a great car count for the Outlaws and I was just glad to get my season kicked off after three straight rainouts,” Schweitzer said. “And we gained 10 to 12 more Midgets for National show. All-in-all it was a great night of racing and a good way to finish the 2018 season.”

While Brad Pounds (IMCA Modified) and Nick Spainhoward (Sports Mods) had championships locked up before the season ended, both of those classes featured nine different winners, illustrating how hard it is to win in those classes.

Big events, such as the Fourth of July week fireworks race, the Mike Moshier Memorial and the Bud Nationals drew strong fields and good crowds but Schweitzer said the overall season was a mixed bag.

“There were some great events but we had some slow nights as well and you’re going to have those,” Schweitzer said.

Through his 16 years of ownership, Schweitzer has pretty much stuck to a schedule of racing all but one or two Saturdays from the first Saturday of March into September.

That will change in 2019, he said, noting he saw racing from a new angle this season.

“It gave me a new perspective, made me realize not every Saturday night is the way to go. Cut back some to try to help the racers and the staff.

“It’s time to start putting that into effect.”

Schweitzer said he is currently finalizing the 2019 schedule and said breaks would most likely be during the long, hot summers.

“I think it would benefit everyone: fans, staff, racers to have a few breaks,” he said.