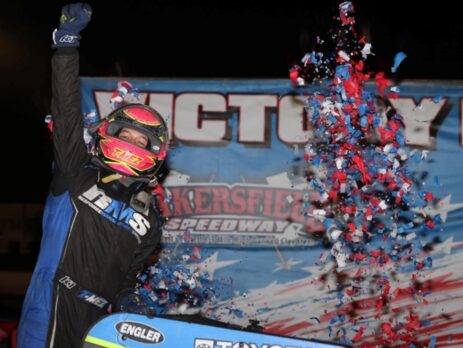 Twenty-two years later, the San Jose, Calif. native stood in the very same spot at Bakersfield’s 1/3-mile dirt oval as he did on that night in the year 2000, replicating the unwavering exuberance that has remained a constant throughout his career.

It also produced the same sense of satisfaction. But this time, it came on the national stage.

Meseraull completed the task at hand during Tuesday night’s November Classic when he tracked down leader Taylor Reimer on the seventh circuit, then led the final 24 laps in succession to earn his third USAC NOS Energy Drink Midget National Championship feature victory of the season in his RMS Racing/EnviroFab – Response Management Services – Engler Machine/Spike/Speedway Toyota.

Entering Tuesday night, T-Mez had been on the uptick, having finished 5th, 4th and 3rd in his three most recent series starts. This time, he bypassed a runner-up finish and skipped right to the front line and to the top of the podium using a simple motto of instruction in order to get the job done.

T-Mez’s ninth career USAC National Midget win moved him into 78th on the all-time series win list alongside Billy Boat, Chad Boat, Tony Elliott and Chuck Gurney, and he did it by adding a little changeup to his pitch selection in order get back on top.

“I’ve been watching a lot of GoPro footage lately and the 67 car (Kofoid) has just been better,” Meseraull said. “I changed my package up a little bit tonight and it looks like it worked.”

Meseraull rolled off third in the 22-car field, then slipped into second in turn three on the opening lap following a close encounter with outside front row starter Mitchel Moles who lost two positions in the process as he got over the cushion but averted the outside wall.

Much of the early going for Meseraull was spent chasing down Reimer for the lead. After multiple attempts to snare the it away, Meseraull made a line drive under Reimer in turn three to pass by, then slid across the racetrack and up over the cushion in turn four. Despite that, Meseraull still managed to power out and come away with the top spot by a car length at the line upon the completion of lap seven.

Reimer remained in tune with Meseraull, attempting a slider one full revolution around the speedway later on lap eight in the same spot. She managed to pull alongside, but it was not enough to thrust her ahead to retake over the spot.

Meanwhile, Pickens had caught up to the lead pack and shot past Reimer and into the second position on lap 12 with a turn three slide job.

Behind him, point leader Buddy Kofoid was engaged in a see-saw battle with Cannon McIntosh that saw them exchange positions no less than five times in a three-lap span between laps 15-17. Eventually, the way swayed Kofoid’s direction when McIntosh bounced atop the turn four cushion, then was clipped on his left front wheel by the right rear tire of Kofoid as he went by.

Meseraull entered heavy traffic on lap 18, which allowed Pickens to close up on the lead to the tune of a three-tenths of a second. All the while, Meseraull pulled out some of his techniques from the playbook, sliding himself into turns one and three while also crowding the infield berm, which even got him up solely on his right rear tire just a tad after halfway as he more than doubled his lead to put him in total control during the waning laps.

Nonetheless, a couple of cautions during the final five laps disrupted Meseraull’s flow and forced him to endure a bit of stop-and-go in the late stages. With five laps remaining, Reimer (5th) nearly flipped over at the top of turn three. After biking it, she landed on all four wheels and was subsequently met by Moles (6th), resulting in both drivers stopping upright.

Reimer’s machine was taken off the track on a hook with the culprit being a broken right shock and radius rod for. Moles refired from the tail of the field and collected a non-indicative 18th place result.

With all things seemingly in tip-top shape, Meseraull was head and shoulders above the competition with the white flag in sight and a win on the cusp. However, Daison Pursley (7th) got over the cushion between turns three and four before tapping the wall and tumbling over to bring out the red flag. Pursley walked away under his own power.

As it turned out, the third restart was the charm for Meseraull who took off like a thief in the night at the drop of the green, leading both go-arounds of the green-white-checker finish to score a 0.583 second triumph over Pickens, Kofoid, Cannon McIntosh and Logan Seavey who came home fifth in his debut for Abacus Racing.

It had been three years since Auckland, New Zealand’s Michael Pickens last raced at Bakersfield. In 2019, he finished second. On Tuesday night, he finished second once again in his Dave Mac Dalby Motorsports/CRC – TRD – Mobil 1/Spike/Speedway Toyota. For Pickens, it was his best USAC National Midget feature result since that same night three years ago.

“It’s payback to these guys for giving me the opportunity to run their car,” Pickens praised. “It’s a professional team and all I have to do is strap on my helmet, jump in the car and go. I don’t have to worry about what bars to run or stagger or whatever. I don’t have to second guess.”

Forced into a backup car after hot laps due to mechanical issues, Penngrove, California’s Buddy Kofoid salvaged his night in a monumental way. Although he came two spots short of extending his Bakersfield winning streak to three, he finished a solid third to extend his USAC National Midget point lead to 209 with six races remaining in his Keith Kunz-Curb-Agajanian Motorsports/Mobil 1 – Toyota – TRD/Bullet By Spike/Speedway Toyota.

“They got it to where I could be comfortable enough and fast out of the gate in a brand new car that I had never sat in,” Kofoid revealed. “Unfortunately, we couldn’t get three-in-a-row, but I felt like we had the speed to do it. It was just a matter of getting there. It was good point night, though, and it’s good to be on the podium again.”

To begin the evening, Jade Avedisian (Clovis, Calif.) recorded her third Fatheadz Fast Qualifying time of the year with the USAC National Midgets. Her three fast times set a new record as she became the first woman in series history to set fast time on three occasions in a single season. 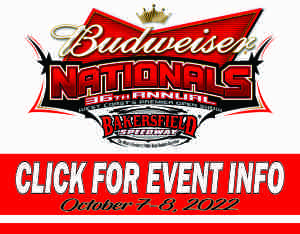