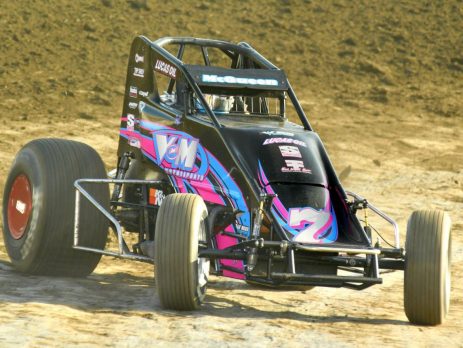 Shannon McQueen summed up what it’s like to be a racer in one sentence earlier this week.

“Most people go on vacation, we go to Bakersfield Speedway when it’s 106,” she said. “That’s our kind of fun.”

That’s exactly where she will be Saturday night as the USAC West Coast Sprint Car Series makes a stop at the track for the first time since 2016.

“We’re going to debut a brand new car,” said McQueen, who is fourth in the championship points race. “We had a little altercation a couple of weeks ago in Ventura when we got collected in a wreck.”

The old chassis is repairable, but had car owners Bobby and Toni Van Meter not had a brand new Maxim chassis ready to go, McQueen likely would have missed the race in her hometown.

How it all started

Thirty-three years after climbing into a race car for the first time as a young child, McQueen’s passion for racing still burns as fiercely as the summer sun in Bakersfield.

“My mom was watching the Indy 500 in ’85 and they did a segment on Quarter Midgets and my mom looked at my dad and said it’d be fun to get Shannon into one,” McQueen said of her start in racing. “He was running a Blown Alcohol Hydro (boat) and said ‘are you crazy?’ We barely have enough money to run the boat.’

“Next week I had a Quarter Midget and the rest is history.”

McQueen moved up to Modified Midgets in 1992 and began racing Midgets in 2004.

“I won the Bay Cities Racing Association championship in 2011 and the USAC Western States championships in 2012,” she said.

She is the only female driver to have won those championships.

Being raised in a racing family, McQueen saw first-hand the struggles it took for her father to field a competitive boat.

And as she moved up the racing ranks, her parents told her their help was limited.

“My mom and dad instilled the importance of education,” she said. “They said I was going to need a good education and good job if I wanted to race.”

So McQueen attended Cal State Bakersfield, graduated and became a Certified Public Account. She started working for Daniells Phillips Vaughan and Bock in 2000 and became a partner there last month.

There are sponsors that help out, but McQueen’s job is a primary funding source for her passion.

“Between the Midgets and Sprints we run about 26 races a year,” she said. “That’s a big schedule for us as a privateer team mostly funded by me.”

McQueen now resides in Tehachapi, but Bakersfield is still “home.”

“The Midgets and Sprint Cars are maintained at my dad’s house, nothing really changed (since the Quarter Midget days) except now it takes a small army to race.

“My dad (Duane), Bobby, my crew chief Ty Hindman and Steve Thomas, those guys are dedicated and they really work hard. My name is out there, but they deserve the credit.”

Not about to slow down

While McQueen said he she loves racing Midgets, the Sprint Cars afford a new challenge.

“It’s something different,” McQueen said of getting into Sprint Cars. “I’ve known Bobby (Van Meter) since I was about four and the opportunity to drive for him came out about four years ago and we worked out a deal.”

McQueen said it’s a been a year-to-year effort to upgrade the team and noted the switch the a Maxim chassis this year was a huge stride.

“I feel like we’re in a pretty good position now,” she said.

McQueen said the lighter Midgets (with about half the horsepower) of the 360-cubic inch Sprint Cars are more nimble than the bigger, heavier Sprint Cars.

“The Sprint cars are slower reacting, the Midgets react much faster,” McQueen said of one of the differences. “On the bigger tracks the Sprint cars are faster but on tracks like Bakersfield Speedway, Petaluma and Santa Maria the lap times are comparable.”

While she has put the emphasis on Sprint Cars this year, McQueen said she plans to race both divisions for a while.

“We’re focusing on the Sprint Car and filling in the schedule with the Midgets, but I still really enjoy running the Midgets and have had some great success,” she said. “As long as I’m having fun I’ll keep on racing.”