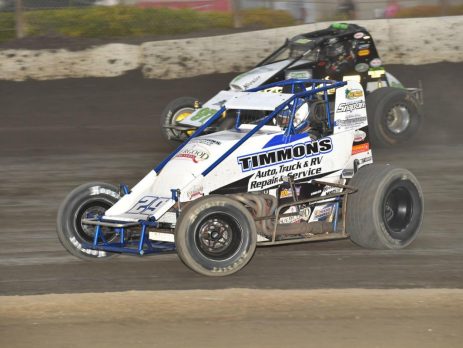 Ryan Timmons will remember his run on Saturday night at Bakersfield Speedway.

Liggett took the lead at the drop of the green flag with Timmons right behind. Timmons made the winning move when he dove low into turn three and came out ahead of Liggett in turn four.

“I really wanted to get Austin there,” Timmons of Pleasant Hill said. “He got me (with a few laps to go) a couple of weeks ago. I’ve finished second to him so many times. I finally beat him, but he’s awesome. I love racing with him.”

Tristan Guardino, who set quick time for the first time in his career earlier in the night, finished second with Liggett fading to third.

While the slide job to get the lead was impressive, the move of the night for Timmons came with two laps to go when he threaded his way past slower cars and the outside wall coming out of turn four, which allowed him to maintain his lead over the hard-charging Guardino.

“No excuses,” said Liggett, who leads the series points. “Those guys (Timmons) were faster than us and hats off to them, they’ve been working hard at this. I really enjoy racing with them and can’t be happier for them. They deserve it.”

The Sport Mod feature was not complete at print deadline.

Ryan Little started on the front row and held a two-car length lead over Ratcliff when a caution fell with two laps to go. Ratcliff, who started 11th, jumped to the outside on the restart and edged ahead as the white flag fell.

The two ran side-by-side for the final lap with Ratcliff getting the win by about half a car. J.D. Mealer was third.

In Mini Stock action, Gene Glover of Visalia took the lead on the first lap and led the rest of the way in a caution-free 20-lap feature.

It was the first win of the season for Glover, who was never challenged.

“I was a little worried when they put in that much track prep (before the race) but it worked in my favor,” Glover said, before adding that his car was for sale.