BAKERSFIELD, Calif. (March 10) – His last-lap pass made Darrell Hood the first-ever winner of a Karl Chevrolet Northern SportMod feature in California. The white flag was out when Hood caught leader Marvin Leist for the front spot, then beat Leist in a drag race to the finish Saturday evening at his hometown Bakersfield Speedway. “I’m really stoked about this class,” said Hood, 53 years old and the father of IMCA Modified hot-shoe Larry Hood. “Driving one of these cars is [...]

BY MIKE GRIFFITH Californian staff writer mgriffith@bakersfield.com A half-lap lead with seven laps to go evaporated due to a caution flag, but that only delayed Tony Toste’s run to victory in the Late Model main event Saturday night at Bakersfield Speedway. Toste of Pismo Beach simply repeated what he did for the first 23 laps as he pulled away from his competition to easily win the 30-lap race on the third-mile clay oval. “I just kept hitting my marks every lap, trying [...]

BY MATT MARTZ Special to The Californian More than four hours and 200 laps after it began, the 2012 Bakersfield Speedway season opener came to a close as hometown favorite Brad Pounds took the checkered flag in a shortened 20-lap IMCA modified main event. Pounds, the 2010 track champion, survived a caution-filled race after taking the lead on lap five, and held off Danny Lauer, who started on the pole. Three-time IMCA Modified champion Gary Dutton finished third, while Robby Sawyer wrestled [...]

Opening night 2012 is set for this Saturday March 3rd. Four divisions of racing starts off the Budweiser weekly racing series at the historic 1/3 mile clay oval north of Bakersfield. IMCA Modifieds, Hobby Stocks, American Stocks and Mini Stocks will take to the track at 6:00pm. The long awaited new racing season here so don’t miss any of the action. Affordable family fun again is the direction the Bakersfield Speedway is taking with adult tickets $10.00  kids 6-12 [...]

Mid Cal Motorsports To Award Chassis To A Modified Driver

The Bakersfield Speedway comes alive this Saturday afternoon for the first time in 2012 with a open practice scheduled from 2pm til 6pm. Practice is open to all cars (no mini dwarfs) to get a look at the new reshaped 1/3 mile clay oval. Cost is $30.00 per person to enter the pits with the grandstands FREE to come out and watch. The Speedway will also have push trucks available for open wheel cars.

A very sad day in the racing community

The Bakersfield Speedway and the Schweitzer family would like to send our deepest condolences to the entire McGowan family in your time of need. Not one single person has made more of a impact on the racing at the Bakersfield Speedway as Richie McGowan did. Whether it was by supporting the track with cars, sponsoring cars, sponsoring races, helping other racers or watching races from the grandstands, his presence was felt each and every Saturday night. The void he [...]

The start of each race season tends to see some changes in the normal race program that people are used to seeing. 2012 is no different as the Bakersfield Speedway has made a change for the better in the off season. Track owner Scott Schweitzer has required the use of RaceCeivers in all divisions. Raceceivers are a small one way scanner that is worn by the driver which in turn allows them to hear instructions or warnings communicated by [...]

Two of California’s premier dirt track facilities have taken another step to improve racing at each track. Over the off season, Bakersfield Speedway and Santa Maria Speedway have met with Electronic Scoring Systems suppliers to see what would be the best option for both track and racer budgets. Promoters Scott Schweitzer and Chris Kearns have chosen MyLaps/AMB Transponder Systems for their respective facilities and are very pleased with what is to come. The two race tracks were amongst a [...]

(JANUARY 3, 2012, BAKERSFIELD, CA) Bakersfield Speedway promoter Scott Schweitzer released the 2012 Bakersfield Speedway event schedule on Tuesday afternoon.  The much anticipated 2012 season, which features 33 race dates, will get under way on Saturday, March 3rd with four action packed divisions that night and it will conclude nearly eight month later after the 27th Annual Budweiser Nationals.  The popular IMCA Modifieds will again headline the 2012 schedule with 18 points season dates.  Other Bakersfield Speedway house division including [...] 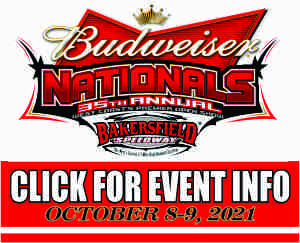